Suzanne Honey Therapies Crowthorne, close to Wokingham and Bracknell....Supporting natural balance and healing for you

This is a reflexology technique which focuses on stimulating the lymphatic reflexes on the feet. It was developed through clinical practice using reflexology for patients suffering from all kinds of cancers at all stages of the disease. Many of the patients who had been treated for breast cancer, consequently suffered secondary lymphoedema.

Complaints relating to lymphoedema often include :

In addition, RLD could be used to support the following conditions: 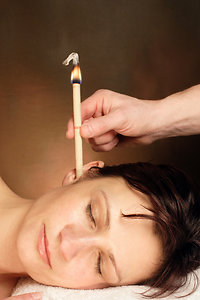 Hopi Ear Candles have been used by many cultures as an effective natural therapy since ancient times to calm the mind and sooth the head and ears.
The Hopi, the oldest Pueblo people with great medicinal knowledge, brought this knowledge to Europe with the professional involvement of Biosun. Since 1985 Biosun has been researching the use of ear candles and re-establishing their popularity.
Biosun ear candles are regularly tested by independent institutes. These are the only ear candles that I use in my treatments.
After noting your medical details I would then examine both ears with an otoscope before starting your treatment.
When the Hopi candle is lit a light suction action and the movement of the flame create a vibration of air in the ear candle, generating a massage like effect on the eardrum. This induces a pleasant feeling of warmth and a balance of pressure in the ears, forehead and sinuses.
At the end of the treatment a relaxing lymphatic facial massage is given to increase circulation and blood flow and help the sinus tubes to drain.

Conditions which have been known to benefit are:

: headaches and migraine
: neuralgia
: symptoms of hay fever
: sensitive flyers ear has shown to benefit from 1 or 2 treatments before flying.
: tinnitus
: swimmers / divers ear
: tension in the head / fuzzy head

A course of treatments is normally 2 or 3 depending on the severity of the condition.

If the eardrum is perforated or grommets are in place then ear candling cannot be carried out.